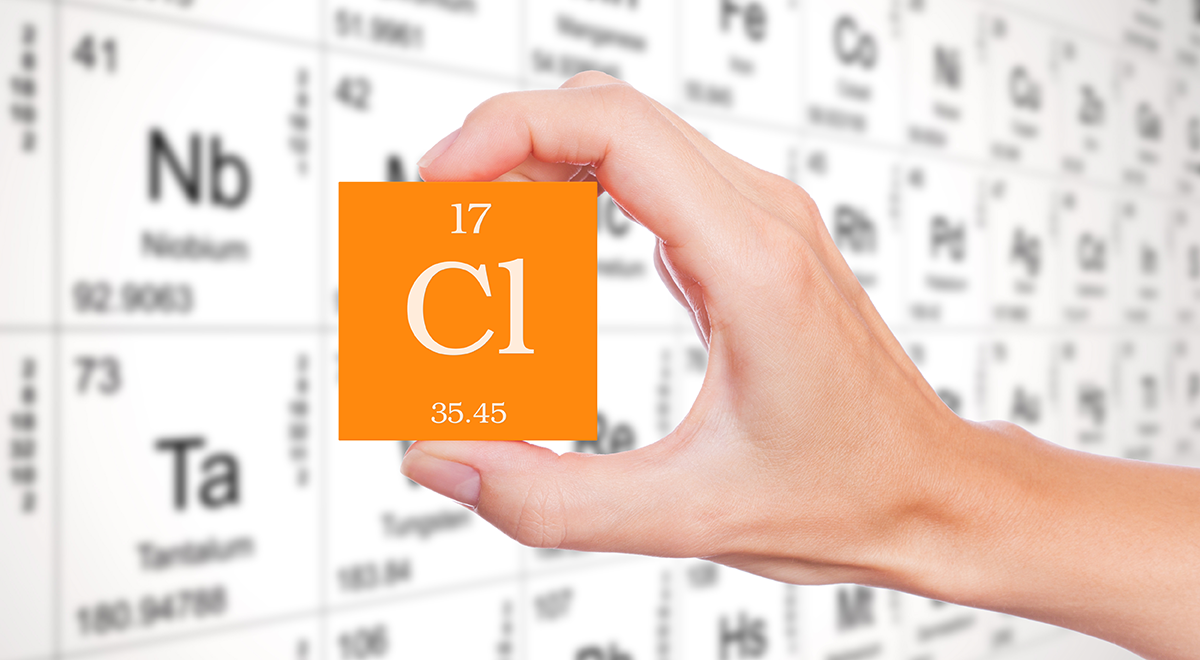 Chlorine is one of the most common chemical elements occurring in nature - even more common than carbon. It makes up 2.9% of the world’s oceans in the form of sodium chloride (salt). Chlorine’s high reactivity means that it almost never occurs on its own, but is instead always bound to another substance in compound form.

Vynova produces chlorine and uses it in the manufacture of polyvinyl chloride (PVC) and sodium hypochlorite. In addition, it supplies liquid chlorine for many applications from its affiliated plant of Potasse et Produits Chimiques (PPC) in Thann (France), where it is also used to produce synthetic hydrochloric acid.


How Chlorine is made

The starting point of chlorine production is a solution of salt in water called brine. You might assume that this solution primarily comes from the sea. In fact, most salt used in chlorine production to obtain the requested purity for this production process, is mined from the earth and contains either sodium or potassium chloride.

Chlorine is produced from brine solution in an electrolysis process. An electric current is passed through the solution, resulting in the formation of chlorine gas at the anode. This chlorine gas contains oxygen and must be purified by liquefaction and evaporation. Caustic soda (NaOH) or potassium hydroxide (KOH) and hydrogen are formed on the cathode, The caustic soda or potassium hydroxide must also be processed before it can be used.

There are three main technologies used for the electrolysis process. Mercury cells have been phased out of production by the end of 2017. The diaphragm cell process separates the anion and cation parts of the cell with a permeable diaphragm (asbestos or synthetic diaphragms) . Brine passes through the membrane from the anode side to the cathode. The asbestos diaphragm has raised environmental concerns, and shall also be phased out, according to the industry’s best available techniques reference documents (BREF) publication in Europe.

The membrane cell process uses an ion-exchange membrane. Depending on the salt used, only sodium or potassium ions, along with some water, pass through the membrane. Membrane cells are more energy efficient than diaphragm cells, and they use less electricity for electrolysis. The caustic solution also requires less energy to increase the concentration, making this the most attractive technology for chlorine production.

European chlorine production peaked in 2007 at just under 11,000 kt per year. After the global financial crisis, demand decreased, eventually dropping to 9,000 kt a year later. Since then, the chlorine market has not shown any signs of recovery, with official figures from 2016 showing a chlorine production level of 9,400 kt.

A major factor affecting current chlorine supply was the decision made by the EU to discontinue all mercury cell operations at the end of 2017. Closure of mercury cell plants has also led to a significant change in supply balance in some regions within Europe.

Our Tessenderlo facility in Belgium has two membrane electrolysis plants, one for caustic soda production and another for potassium hydroxide production. The installations were commissioned in 2006 and 2018 respectively. In Tessenderlo, chlorine is converted to ethylene dichloride (EDC) and vinyl chloride monomer (VCM), two essential building blocks for the production of PVC. The EDC and VCM are used to further manufacture PVC at our Wilhelmshaven, Beek and Mazingarbe facilities.

Vynova produces chlorine at its Runcorn site in the UK at a state-of-the-art membrane electrolysis plant, operated in a 50/50 joint venture with Inovyn. Chlorine is used as an intermediate product to feed the EDC plant. EDC from Runcorn is shipped to the Wilhelmshaven facility in Germany, where it enters the PVC production chain.

PPC Thann, an ICIG affiliate, is also operating a membrane cell technology which was commissioned in 2015. This membrane electrolysis begins with a potassium chloride base, and produces both potassium hydroxide and chlorine. Chlorine is used on-site for various purposes, but is also sold in liquid form to major customers in Europe, in addition to being further processed into hydrochloric acid and sodium hypochlorite.

Recognising the risks involved in production and handling of chlorine, Vynova is dedicated to demonstrating its commitment to safety and environmental care. To ensure the highest transport safety standards, Vynova supplies liquid chlorine from Thann by rail, strictly adhering to the safety recommendations of Euro Chlor, the European chlor-alkali industry association.


Connect with Vynova for Chlorine Chemistry

Vynova supplies chlorine to customers directly and also uses it to make PVC, sodium hypochlorite and hydrochloric acid. Our integrated production network distinguishes us as a reliable and competitive supplier to a wide range of industries. Find out more about Vynova’s products and commitment to safety here.