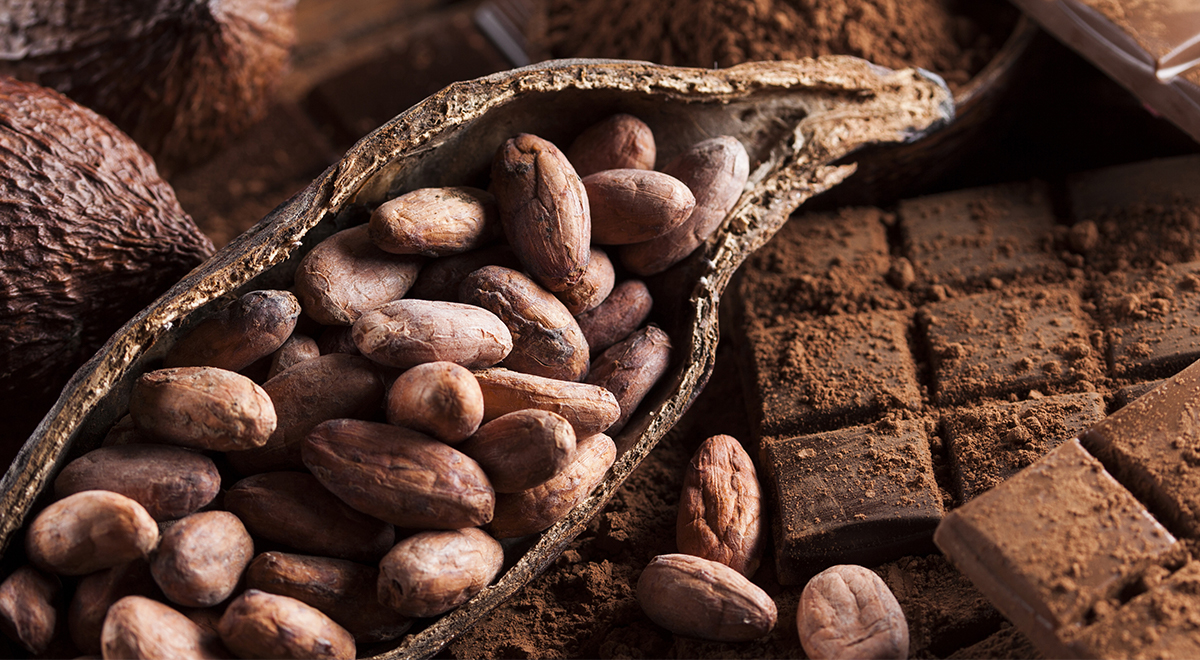 The origins of chocolate stretch back to the 18th century when a Swedish botanist, Carolus Linnaeus, gave the cocoa tree its Greek name Theobroma Cacao, which means “food of the Gods.” However, it was during the 19th century that many of the innovations and improvements in chocolate production were developed. The first conche (a machine, used during the manufacture of chocolate, which mixes and smooths the chocolate mass) was developed in 1879 by Rudolph Lindt. Daniel Peter found a way to blend milk into chocolate in 1876, and Casparus Van Houten created the cocoa press in 1828. But one of the most significant developments was the introduction of alkaline salts by Coenraad van Houten in 1828.

Dutch chemist van Houten discovered that the addition of alkaline salts to cocoa powder reduced the acidity of the drink, making it less bitter and sour. Not only did his process improve the palatability of the drink, it also enhanced the colour, creating a product that had a greater market appeal.


Alkalisation and the cocoa production process

Cocoa production has evolved into a systematic process starting with the harvesting of cocoa pods from the tree. Each tree produces only 20 to 30 pods per year, which represents enough cocoa for 450 g of chocolate. Pods are split open to remove the beans covered with sweet white pulp. The first stage of production is fermentation and drying to remove this pulp from the beans. This is followed by winnowing, which removes the shell from the nib. Roasting the cocoa nibs helps to darken the colour and establish the flavour and aroma. The roasted nibs are then processed through a stone mill to form a rich liquor containing over 50% cocoa butter. The last step in the production process is pressing, where the butter is extracted from the pure cocoa. The final product of cocoa leaves the factory in solid blocks or powder form after pulverisation.

Alkalisation can be performed after winnowing on the cocoa nibs, after grinding on the cocoa liquor, or after pressing on the cocoa cake. Controlling the alkalisation process in terms of time and temperature gives a wide range of flavours and colours in chocolate products. The type and quantity of alkalising ingredient also has an impact on the final product.

Potassium carbonate is one of the most used alkali salts in the alkalisation of cocoa. The process is carried out in controlled conditions in a reactor, where temperature and pressure are varied to achieve the desired pH increase. Water is also added to the solution, but care must be taken to keep the final moisture content below 5%. This helps to maintain maximum aroma and colour intensity. Nib alkalisation is the most common method employed due to the enhanced colours and flavours achievable during this phase of production. It is important to note that cocoa butter is alkalised along with the cocoa, which may require further downstream processing.


Health benefits of cocoa and alkalisation

Cocoa and chocolate are known for their polyphenol and flavanol content. Their antioxidant activity contributes to cardiovascular health as well as improved cholesterol and blood pressure. A study conducted on cocoa powders of varying pH shows that flavanol content reduces as the pH of the cocoa powder rises. Nevertheless, even the lowest flavanol content in cocoa is in the top 10 % of the US Department of Agriculture database of measured foods with detectable flavanols.

Besides physical health benefits, chocolate is also known to improve our emotional health. Active compounds in cocoa enter the bloodstream quickly increasing levels of serotonin and endorphins. This effect combined with a reduction in our stress hormone, cortisol, leaves us feeling in a good mood!

Innovations in chocolate manufacturing methods through the processing of cocoa are consistent with Vynova’s value of continuous innovation. Our potassium production facilities use the latest processing technology and provide a reliable and sustainable supply to the European and global markets. Vynova has two independent potassium carbonate manufacturing facilities – Tessenderlo (Belgium), and our affiliated site of Potasse et Produits Chimiques (PPC) in Thann (France). Contact our sales team or find out more about potassium carbonate from Vynova here.