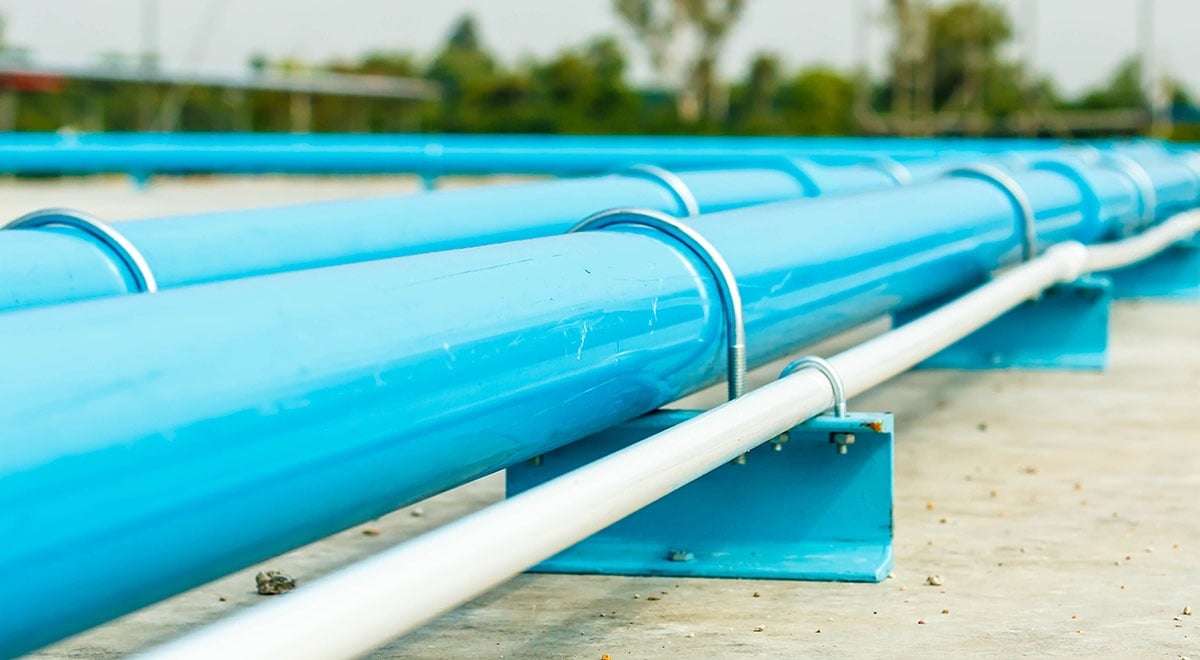 The rise in use of PVC for pipes began in Germany in the 1930s. Residential drinking water was the first application for an installed PVC piping network. After the Second World War, the technology spread, as the benefits of using PVC became more widely recognised. Indeed, this versatile material is lightweight, resistant to chemicals and corrosion, and has the ability to withstand higher temperatures. By 1960, the first American Society for Testing and Materials (ASTM) standard for PVC piping had been issued.

One of the latest innovations in the quest to improve PVC piping properties is a process called molecular orientation - a process that results in PVC-O. PVC-O has all the original advantages of PVC, but its properties are even more enhanced, resulting in several economic and practical benefits.

The molecules in virgin PVC are randomly distributed. However, scientists have discovered that stretching PVC materials under specific conditions of temperature, pressure, and speed causes the molecules to align themselves in the direction of stretching. This results in a laminated structure within the PVC-O product.

No chemical properties are changed during the transition from PVC to PVC-O, but the mechanical and physical properties of the pipe are greatly enhanced.

Before the introduction of PVC-O, it would have been difficult to imagine an improvement in the properties of PVC. The alignment in molecules in the laminate layers of the pipe wall, however, succeeds in improving almost every property that gave rise to the material’s popularity in the first place.

Impact resistance is the ability of a product to withstand bumps and knocks without breaking or cracking. This is important in construction activities because of the heavy machinery involved, and the robust nature of worksites. The property graph (Figure 1) below comparing PVC-U (normal PVC) with PVC-O shows a significant improvement in impact resistance and crack propagation.

These significant improvements in tensile strength mean that PVC-O piping can be made with thinner walls and yet have the same pressure rating as standard PVC piping. This variation offers two substantial benefits to users. First, thinner walls translate to a larger internal pipe diameter. This results in a higher volume of product flow through the piping network. Consequently, there is also lower material usage resulting from thinner-walled pipes, which is cost-saving for manufacturers.

One of the problems with very rigid materials is that they lack malleability. This means that pipe networks must traditionally be laid in straight lines with elbows. PVC-O is more ductile than standard PVC, so it can more easily follow the contours of the geography without fear of breaking.

Because PVC piping is used extensively in water networks, it is subjected to the effect of water hammer when valves are shut off. Water hammer is like a shock wave that travels through the pipe because of a sudden shut off in flow. The increased flexibility of PVC-O enables it to absorb these shocks better, giving it longevity in harsh operating conditions.

Operating water pipelines consumes a significant amount of energy pumping water through the network. PVC-O piping has smooth walls, which lowers their resistance to flow. This equates to less energy needed to pump water from source to destination, and therefore lower operating costs.

The thin walls of PVC-O piping make this product lighter than standard PVC pipes. Construction crews thus benefit from the improved ease of placing pipes into position. The whole installation process, from making connections to manoeuvring pipes into position, is simplified by lighter PVC-O.


Where can PVC-O be used?

PVC-O piping has extensive potential in water applications. This includes both waste water and supply networks. Several project implementations have already been documented demonstrating advantages of PVC-O that make it the material of choice.

A 90km water transfer pipe project was commissioned in Australia with a specification for Polyethylene (PE) piping. However, an evaluation of PVC-O as an alternative material concluded that PVC-O provided a superior solution. One of the key economic justifications was the reduction in pumping costs and energy savings. Project reports now indicate a rapid installation program with up to 1,800 m of piping laid per shift.

Another project involved the installation of a 19 km potable water pipeline in the Netherlands. Justifications for the PVC-O material choice included lower pumping costs, as well as the material’s ability to withstand higher pressures and lower temperatures.

Vynova is a leading European producer of PVC. Reach out to Vynova to enquire about reliable PVC supply for your needs here. Find out more about Vynova’s PVC products here.